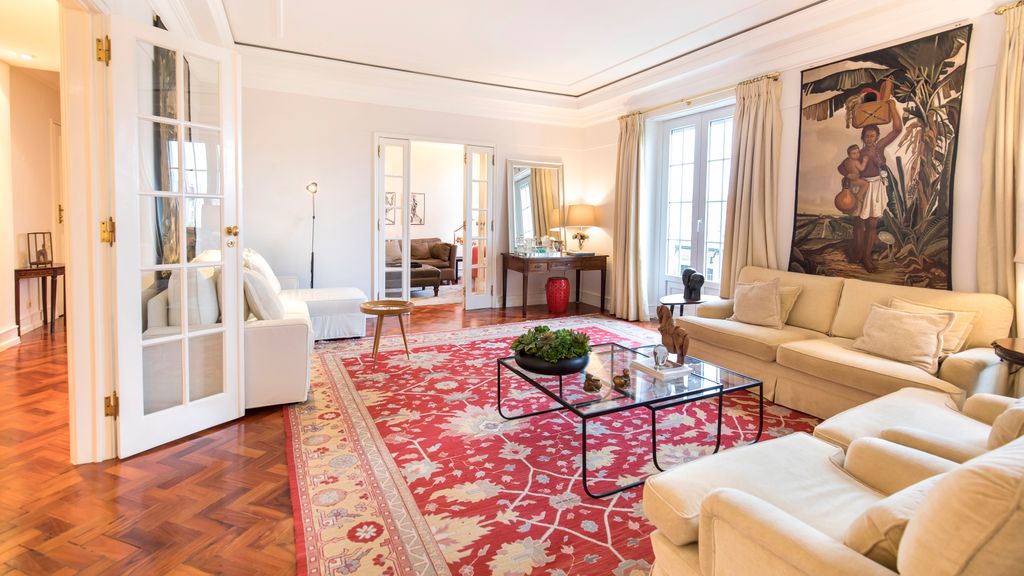 Situated in Campo Pequeno, this spacious 3 bedroom apartment is charmingly decorated with contemporary and antique elements that illicit a unique and peculiar atmosphere to this exclusive space! Perfect for up to 6 guests, the apartment is well-equipped and located in a very safe and calm neighborhood just 10 minutes by metro to downtown Lisbon. Top attractions nearby: - Famous Campo Pequeno Bullring and Mall: 1 min - Campo Pequeno Metro Station: 5 min - Museu Calouste Gulbenkian: 17 min - Eduardo VII Park: 27 min

This spacious 230m² apartment is located on the 5th floor of an apartment building in Campo Pequeno (Elevator available!). The unique decor is striking as it exudes a modern yet antique feel. LIVING SPACE: - Upon entering this apartment you will access a long corridor, followed by a small TV room with a comfortable sofa, and a spacious living room with a beautiful fireplace and sofas for you and your family to unwind and relax after a long day spent exploring the city. - A lovely dining table that can accommodate up to 10 people is also available here, whereby you can enjoy a delicious home-cooked meal with your group! KITCHEN: - The kitchen comes fully equipped with amenities such as a fridge, a freezer, a toaster, a microwave, an oven, a stove, ample storage, a small table for two, a laundry area and a lovely balcony for your convenience! BEDROOMS: - The master bedroom is well decorated and comes with a very comfortable king-sized bed and crisp, clean linen; the perfect combination for a well-rested sleep! - The second bedroom comes with a queen-sized bed and comfortable linen! - The third bedroom comes with a lovely queen-sized bed! BATHROOMS: - The apartment has two well-decorated bathrooms that come with toilet paper and towels. *Please note that the house is always filled with ample natural light and is made up of large soundproof windows in every room. We can assure you that you will absolutely love your stay here!

The apartment is located in a very calm and safe neighborhood, just a few meters away from the Campo Pequeno Square. The magnificent building in the square was built in 1892 and it mirrors Moorish architecture with small cupolas atop its four main towers. It was based on the Madrid bullring of Las Ventas. After being closed for many years due to extensive renovation, it reopened back in 2006 and hosts a new retractable ceiling, a shopping mall, restaurants, cinemas, and a supermarket. You will also find here parking space for 1200 cars. Nearby attractions worth visiting: PARQUE VII´S GIANT GREENHOUSE Built in the 1930´s, this gigantic greenhouse houses plants from all over the world in climate controlled environments. It's certainly worth a visit for those that enjoy nature and green spaces! AVENIDA DA LIBERDADE The city’s version of Paris’ Champs Elysées. It’s a tree-lined boulevard noted for its high-end brand outlets, tailoring shops and café´s. PARK EDUARDO VII A public park that occupies an area of 26 hectares to the north of the Avenida da Liberdade and the Marquês de Pombal Square. It overlooks downtown Lisbon and the Tagus river so it is the perfect spot for a picnic! BAIXA (DOWNTOWN) Baixa is an elegant district that contains the grid of streets north of the famous Praça do Comércio, between Cais do Sodré, and the Alfama district beneath the São Jorge Castle. It then extends northwards towards the Rossio and Figueira squares, and one of the most important avenues in Lisbon, the 1100m long Avenida da Liberdade. CHIADO This vibrant and cosmopolitan area is shopping hub of downtown Lisbon hosting a variety of charming old bookshops, local and major international fashion brand outlets, restaurants, and café´s. In fact, the Café Brasileira, one of the oldest café´s in the city, can be found here. ROSSIO Rossio has been a traditional meeting point for the people of Lisbon dating back to the 18th century. Some of the cafés and shops in the square, such as the Café Nicola, were frequented by famous poets such as Manuel Maria Barbosa du Bocage. Other traditional shops include the Pastelaria Suíça and the Ginjinha, where the traditional Portuguese liqueur (Ginjinha) can be tasted.