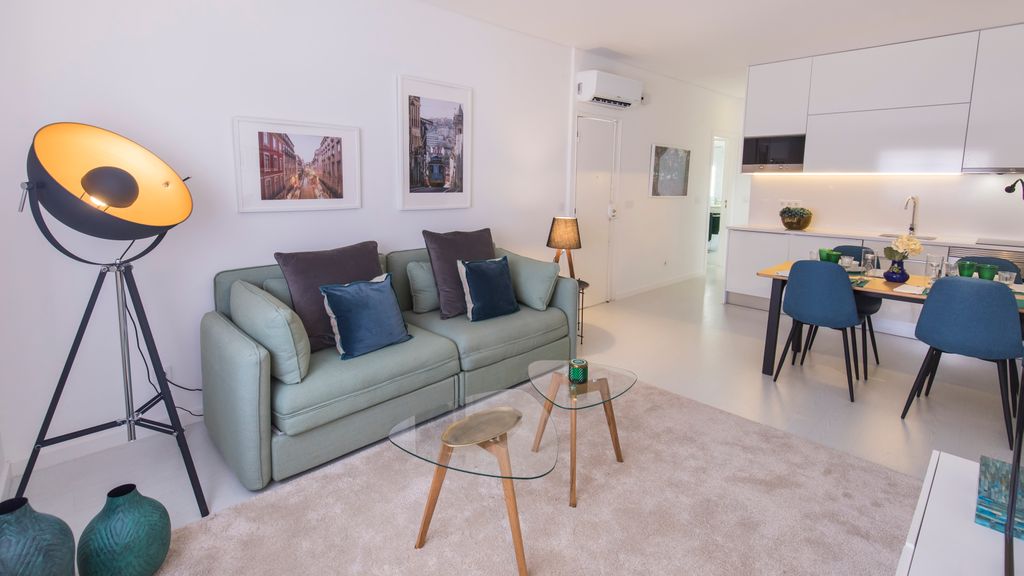 Located in Principe Real, this apartment is situated on the 3rd floor of a residential building and is perfect for your trip to Lisbon! Charmingly decorated, it can accommodate up to 4 people and is well-equipped to ensure you have a comfortable and memorable stay in our sunny capital! What's nearby: - Botanical Garden of Lisbon: 2 min - Jardim do Principe Real: 4 min - Rato Metro Station: 7 min - Miradouro de São Pedro de Alcântara: 9 min - Ascensor da Glória: 16 min * Please note that the apartment is located on the 3rd floor and unfortunately an elevator is not available in the building.

This modern and well-lit 1 bedroom apartment is located on the 3rd floor of a residential building in the lovely neighborhood of Principe Real. About the apartment: - The apartment has one lovely bedroom that comes with a super comfortable set of bed linen! - The living/dining room is charmingly decorated, has a comfortable sofa bed that can accommodate up to 2 people and a dining table that seats up to 4 people. - The modern kitchen is well-equipped with all the equipment you may require for the preparation of a delicious home-cooked meal, such as an oven, an electric cooker, a washing machine, a fridge, etc. You can also watch TV and relax while cooking your favorite meal! - All rooms are fitted with central heating for those chilly winter nights and air-conditioning to cool the apartment in the summer. We are certain that this lovely apartment will definitely provide you all the authenticity and comfort you're looking for!

Located in Príncipe Real, the flat is close to Rossio, Chiado, and Martim Moniz. You will find yourself in a renovated and multicultural neighborhood. The famous viewpoint, the “Miradouro de São Pedro de Alcântara” is literally 10 minutes away from the apartment. A few places to discover: SÃO JORGE CASTLE Easily one of the most memorable monuments in Lisbon, the Moorish São Jorge Castle is one of the jewels of Lisbon, one that has overlooked the historic city of Lisbon and the Tagus River for over a millennium. ROSSIO Rossio has been a traditional meeting point for the people of Lisbon dating back to the 18th century. Some of the cafés and shops in the square, such as the Café Nicola, were frequented by famous poets such as Manuel Maria Barbosa du Bocage. Other traditional shops include the Pastelaria Suíça and the Ginjinha, where the traditional Portuguese liqueur (Ginjinha) can be tasted. BAIXA (DOWNTOWN) Baixa is an elegant district that contains the grid of streets north of the famous Praça do Comércio, between Cais do Sodré, and the Alfama district beneath the São Jorge Castle. It then extends northwards towards the Rossio and Figueira squares, and one of the most important avenues in Lisbon, the 1100m long Avenida da Liberdade. CHIADO This vibrant and cosmopolitan area is shopping hub of downtown Lisbon hosting a variety of charming old bookshops, local and major international fashion brand outlets, restaurants, and café´s. In fact, the Café Brasileira, one of the oldest café´s in the city, can be found here. ALFAMA Recognised as one of the oldest districts in Lisbon, Alfama is a traditional, tranquil and artisan neighborhood. It hosts a labyrinth of streets that are best explored without a guide or a map as an exciting museum, viewpoint, restaurant or funky store is just around the corner. Here also lies the heart of fado, the melancholic Portuguese genre of music whose origins can be traced back to the 1820s in Lisbon. The famous Tram 28 also passes through this district, which connects the districts of Graça with Baixa through Alfama, thus it is perfect for both those that enjoy hill climbing, and those that do not.