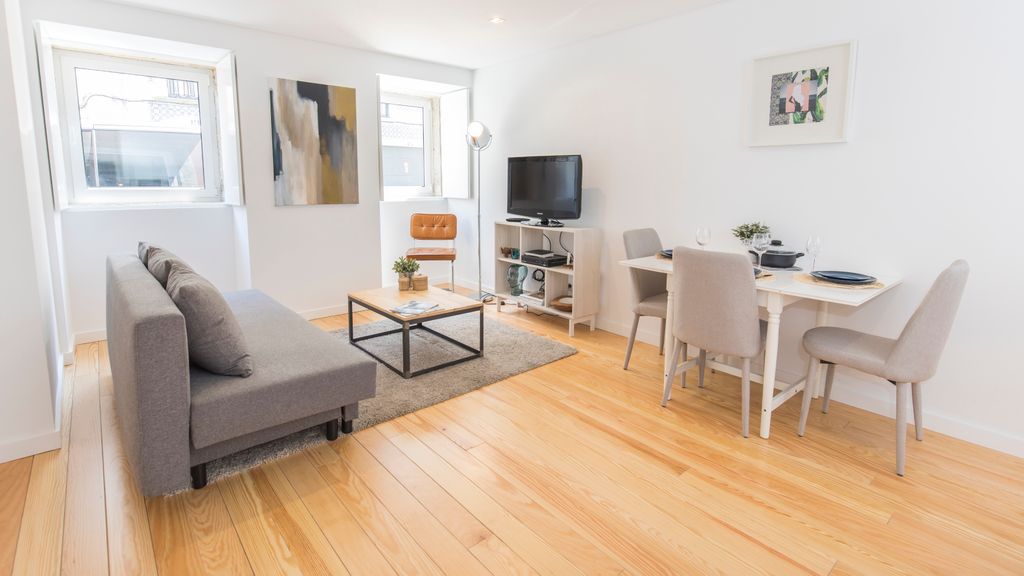 Located in Lapa - a residential area known for its great iconic church, the Basilica da Estrela, this apartment includes a lovely patio and is well-equipped and well-lit, making it perfect for your trip to Lisbon! Perfect for couples, this apartment comes with one bedroom, one bathroom, a modern living room, and a fully-equipped kitchen! Book now and make it your new home away from home! Top attractions nearby: - Jardim da Estrela: 5 min - Basílica da Estrela: 6 min - Assembly of the Republic: 8 min - Botanical Garden of Lisbon: 12 min - Miradouro de Santa Catarina: 17 min

Our lovely apartment is well-lit, modernly decorated and is certainly an ideal choice for your trip to Lisbon! Perfectly equipped to host up to 3 adults, the apartment is perfect for couples or friends traveling together to our lovely city and hoping to explore Lisbon from a quiet Portuguese neighborhood. The apartment itself comprises of: -A modernly decorated living room with a lovely dining area which will certainly be the perfect spot to relax and unwind after a long day spent exploring the city! -A fully-equipped kitchen with a microwave, an oven, a washing machine, and much more! -A beautiful bedroom with a queen-sized bed and a new bathroom with a lovely shower. Towels and toilet paper are provided for your convenience! -A lovely little patio where you can enjoy a cup of coffee or a glass of wine in the evening before heading indoors for a good nights rest in your new home away from home! We look forward to hosting you!

Located in Lapa, the apartment is close to Santos, one of the most well known neighborhoods in Lisbon, and just 2 minutes away from the iconic Estrela Church (“Basilica da Estrela”). Santos and Bairro Alto are the centre of nightlife, with many popular bars and discos in the area. Lapa is also close to Jardim da Estrela and Tapada das Necessidades, two gardens that are certainly worth visiting. A few places worth exploring nearby: PRAÇA LUÍS DE CAMÕES A square dedicated to the well-known Portuguese writer Luís de Camões (his bronze statue can be found in the center of the square), it separates the Chiado and the Bairro Alto districts and is one of the city’s favorite meeting places. It is also one of the main stops of Tram 28, the famous Tram that connects some of the famous districts in Lisbon, such as Graça, Baixa and Alfama! IGREJA DE SÃO ROQUE The earliest known Jesuit church in Portugal. It was one of the few buildings to survive the earthquake of 1755 relatively unscathed. MIRADOURO DE SÃO PEDRO DE ALCANTARA A lookout terrace and garden in Bairro Alto that faces downtown Lisbon and the castle. It is considered to be one of the most romantic miradouros in Lisbon due to its its beautiful garden and perfect view. To get here you can take the Elevador da Glória (Gloria funicular) or go up the Calçada da Glória. JARDIM DO PRÍNCIPE REAL This romantic garden was built in the mid 19th century and is organised around a large lake and fountain. It is the perfect spot for a drink, and often hosts craft and food fairs around the end of every month! MIRADOURO DE SANTA CATARINA Also known as the Adamastor (the Roman-Greek mythology's giant mentioned in the Luís de Camões' Os Lusíadas, the book that described the Portuguese voyages of discovery during the 15th and 16th centuries), it is the ideal location for viewing the river and the south end of Lisbon. ELEVADOR DA BICA The funicular that connects Calçada do Combro/Rua do Loreto and the Rua de S. Paulo. RUA COR DE ROSA Situated near the Cais do Sodré metro station, the beautiful Pink Street guides you to some of the most popular bars in Lisbon. The famous Pensão do Amor can also be found here, which is a spectacular bar dedicated to the art of love. PARK BAR A fantastic rooftop restaurant, bar and esplanade with a stunning view of Lisbon and the Tagus river. It is perfect for lunch, evening drinks and night cocktails with friends.