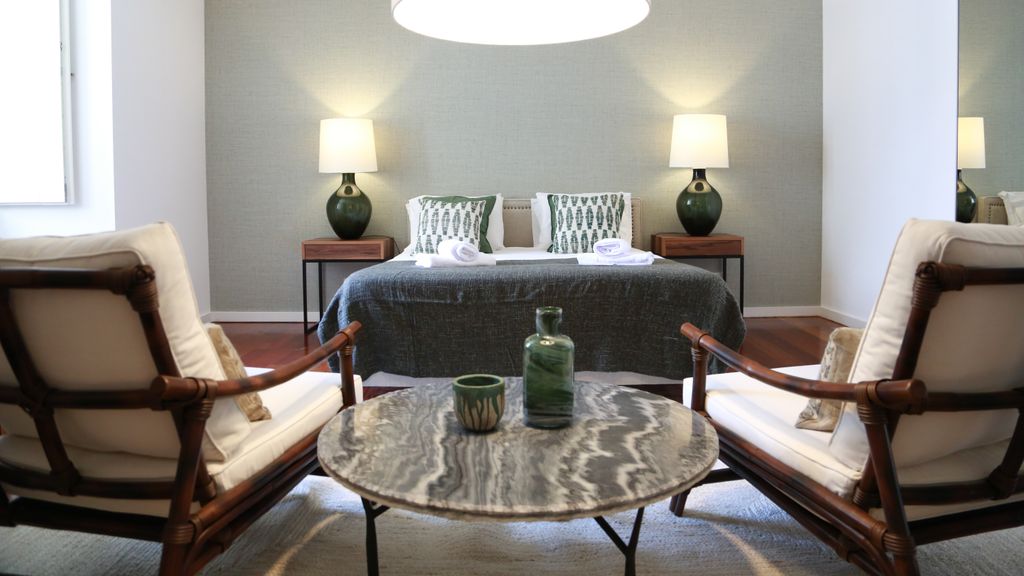 **Covid 19: If you are concerned about the coronavirus pandemic, rest assured that our cleaning teams are equipped to properly disinfect each apartment between stays. LovelyStay will also be flexible in case you need to reschedule or even cancel your booking with us. Stay safe!** With comfortable bedrooms, dark oak wood flooring, original abstract work, a modern living room, and spacious bathrooms, this 3 bedroom apartment is perfect for your trip to Lisbon! This flat is situated in the hottest neighborhood in Lisbon; Chiado, just a few steps away from one of the oldest cafés in Lisbon: A Brasileira. With a maximum occupancy of 8 people, the Chiado 3Bedroom Wonder is perfect for families or a group of friends traveling together to our sunny city! We look forward to hosting you! WHAT'S NEARBY: - Baixa/Chiado metro station: 1 min - Carmo Convent: 3 min - Santa Justa lift: 5 min - Praça Dom Pedro IV: 8 min - Terreiro do paço: 15 min * It is worth noting that the apartment has the added luxury of having an elevator, however, a short flight of stairs must be climbed before arriving at its doors. *COVID VACCINATION CERTIFICATE REQUIRED*

Located in Chiado, the shopping hub of Lisbon, This 258 m² apartment with its 3 bedrooms and 3 bathrooms is spacious and stylishly decorated. Its high ceilings, large windows, ample amenities, and great location make it perfect for your trip to Lisbon with your friends/family! KEY FEATURES: - A bright and well-furnished open-plan living room. Relax and catch up on your favorite Netflix show the comfortable sofa after a busy day; -A dining area with a quaint table for six where you may enjoy some quality time and a warm meal with your family or group after a long day exploring the city! -A well-equipped kitchen with all the essentials including a dishwasher, an electric stove, a microwave, an oven, a fridge-freezer, a coffee-maker, and a washing machine - An en-suite bedroom with a double-bed, accompanied by a lovely private bathroom (bathroom essentials included!); -A charming second bedroom with a large queen-sized bed, and crisp, clean linen for a well-rested sleep. -A third bedroom with twin beds that come with clean and comfortable linen. This room is perfect for kids! - Two additional bathrooms that come with towels, toiletries and toilet paper. The toiletries are all provided by the luxurious international brand "Damana" and are made of all-natural ingredients. - Central heating is provided throughout the apartment! - An elevator is available in the building; however, a short flight of stairs must be climbed before arriving at its doors. - Ambient lighting can be found throughout the apartment. This 3 bedroom wonder in Chiado will definitely make your stay in the heart of Lisbon truly memorable and comfortable!

The apartment is located in Chiado, The shopping hub of Lisbon. This vibrant and cosmopolitan area hosts a variety of charming old bookshops, local and major international fashion brand outlets, restaurants, and café´s. In fact, the Café Brasileira, one of the oldest café´s in the city, can be found here. Chiado neighbors Baixa. Baixa is an elegant district that contains the grid of streets north of the famous Praça do Comércio, between Cais do Sodré, and the Alfama district beneath the São Jorge Castle. It then extends northwards towards the Rossio and Figueira squares, and one of the most important avenues in Lisbon, the 1100m long Avenida da Liberdade. Other local attractions: GARRET STREET The easiest way walking to get to Baixa-Chiado is through Rua Garret. It hosts a number of remarkable historical shops, such as the Bertrand Bookshop, distinguished by the Guiness World Records as the world’s oldest bookshop founded in 1732 and other recommended spots such as the Armazéns do Chiado, the busy shopping mall of Chiado, and the Santini Ice Cream store located right opposite the mall. ELEVADOR DE SANTA JUSTA The famous elevator was inaugurated in 1902 and built by a Portuguese-French engineer who studied with the architect of the Eiffel tower, Mesnier du Ponsard. Using steam as an energy source, as it did back in the day, it takes you up to the top to admire the downtown landscape. It is also connected via a passage to the Carmo Convent and museum, another spot worth visiting in the area! PRAÇA DO COMÉRCIO Impossible to miss, the iconic Praça do Comércio, also called Terreiro do Paço, is the original spot where the royal palace was located until the massive destruction caused by the 1755 earthquake. It was recently considered as one of the most beautiful and perfectly dimensioned squares of Europe. You can also climb up the Archway of Augusta to get a spectacular view of the square, the river and the surrounding area. AVENIDA DA LIBERDADE The city’s version of Paris’ Champs Elysées. It’s a tree-lined boulevard noted for its high-end brand outlets, tailoring shops and café´s. ROSSIO Rossio has been a traditional meeting point for the people of Lisbon dating back to the 18th century. Some of the cafés and shops in the square, such as the Café Nicola, were frequented by famous poets such as Manuel Maria Barbosa du Bocage. Other traditional shops include the Pastelaria Suíça and the Ginjinha, where the traditional Portuguese liqueur (Ginjinha) can be tasted. ALFAMA Recognised as oldest district in Lisbon, Alfama is a traditional, tranquil and artisan neighborhood. It hosts a labyrinth of streets that are best explored without a guide or a map as an exciting museum,viewpoint, restaurant or funky store is just around the corner. Here also lies the heart of fado, the melancholic Portuguese genre of music whose origins can be traced back to the 1820´s in Lisbon. The famous Tram 28 also passes through this district, which connects the districts of Graça with Baixa through Alfama, thus it is perfect for both those that enjoy hill climbing, and those that do not. SÃO JORGE CASTLE Easily one of the most memorable monuments in Lisbon, the Moorish São Jorge Castle is one of the jewels of Lisbon, one that has overlooked the historic city of Lisbon and the Tagus River for over a millennium.