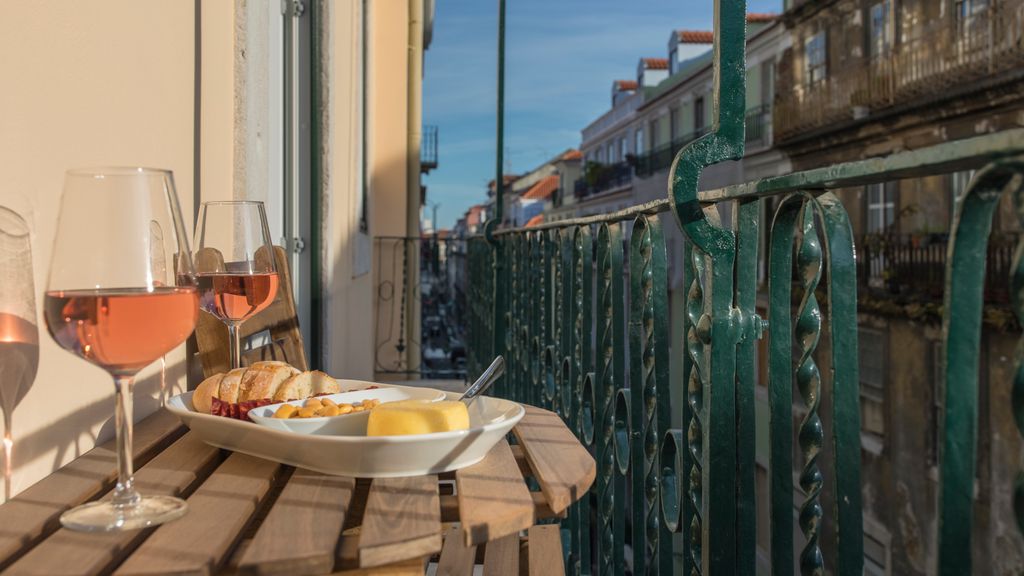 ** LUXURY APARTMENTS ** In the heart of the city center - 1 min away from the Santa Justa Elevator, 3 min away from the metro station, and 5 min away from the Praça do Comércio! With a fantastic view of the Santa Justa elevator, the Carmo Convent, this luxurious apartment has it all! This BRAND NEW and beautifully decorated 2-bedroom apartment comes fully equipped ample amenities (Nespresso Caps, Soap, Shampoo, Body Lotion, Conditioner, Kitchen basics), 24 hour hassle-free self check-in with keypad, climate control, HIGH SPEED fiber optic Wi-Fi, a Marshall sound system, luxurious bed linen and more; ensuring that your stay in Lisbon will be restful and very memorable! »» Train, bus, taxi and tram stops are also right around the corner! «« Book now and make this apartment yours for the holidays!

Curious about what makes Lisbon such a popular holiday destination? Live like a local in the heart of the city and find out for yourself! Located in a BRAND NEW building in Baixa lies this modern, comfortable and fully equipped 72sqm two-bedroom apartment. The location is immensely sought after by all those visiting Lisbon as it in the perfect spot to sample to all of Lisbon´s favorite pastimes, such as; - Shopping in Chiado; - Walking to the Praça do Comércio to watch the sunset; - Grabbing the train in Rossio station to head to Sintra and Mafra for the day, or; - Walk to Cais do Sodré to catch the train that goes to Cascais and it´s popular beaches! ----------------------------------------------------------------------------------------------- This luxurious Prima Collection apartment comprises of; BEDROOMS - Two bedrooms with luxurious queen-sized beds, 4 large pillows each, and comfortable linen. The rooms offer a lovely view of the cobblestoned streets outside and a glimpse of the Santa Justa elevator! BATHROOMS - One family bathroom equipped with a rain shower, a large mirror, a magnifying mirror, and a toilet. Towels, toilet paper, shampoo, conditioner, body lotion, and hand soap are all provided for your convenience! The toiletries are all provided by the luxurious international brand "Damana" and are made of all-natural ingredients. -A second bathroom equipped with a toilet, a sink, and ample toiletries! SOCIAL TOILET - Close to the living room, there is an independent toilet LIVING SPACE - One living room with a comfortable sofa bed, contemporary Portuguese décor, a 50' UHD TV, and a Marshall sound system. This truly is the perfect spot to relax and unwind after a long day spent exploring our sunny city. - A dining table located in the living room can accommodate up to four people and will allow you to enjoy a delicious breakfast with your loved ones before heading off to discover all that Lisbon as to offer! KITCHEN - A kitchenette that comes fully equipped with all the appliances you may require during your stay, such as a stove, a microwave oven, a Nespresso machine, a refrigerator, a freezer, a toaster, a dishwasher, a washer/dryer and more! Please note that basic kitchen ingredients such as olive oil, salt, and pepper are all provided exclusively for you! Book now and make this modern flat your new home away from home! We are certain your stay at our apartment will make your trip to Lisbon ever more memorable! A few interesting spots nearby: - Paul for fresh croissants and pastries; 32m (1 minute away) - Fabrica de Nata for some delicious custard tarts; 77m (1 minute away) - Mini Preço; 260m (3 minutes away) - Baixa-Chiado metro station; 240m (3 minutes away) - Rossio Train Station; 180m (2 minutes away) - Santa Justa Elevator; 58m (1 minute away) - Armazens do Chiado for a bit of shopping or a quick dinner; 210m (3 minutes away) Open now: A Starbucks RIGHT DOWNSTAIRS!

The apartment is located in the center of the city, Baixa. Baixa is an elegant district that contains the grid of streets north of the famous Praça do Comércio, between Cais do Sodré, and the Alfama district beneath the São Jorge Castle. It then extends northwards towards the Rossio and Figueira squares, and one of the most important avenues in Lisbon, the 1100m long Avenida da Liberdade. Baixa neighbors Chiado, The shopping hub of Lisbon. This vibrant and cosmopolitan area hosts a variety of charming old bookshops, local and major international fashion brand outlets, restaurants, and café´s. In fact, the Café Brasileira, one of the oldest café´s in the city, can be found here. Other local attractions: GARRET STREET The easiest way walking to get to Baixa-Chiado is through Rua Garret. It hosts a number of remarkable historical shops, such as the Bertrand Bookshop, distinguished by the Guiness World Records as the world’s oldest bookshop founded in 1732 and other recommended spots such as the Armazéns do Chiado, the busy shopping mall of Chiado, and the Santini Ice Cream store located right opposite the mall. ELEVADOR DE SANTA JUSTA The famous elevator was inaugurated in 1902 and built by a Portuguese-French engineer who studied with the architect of the Eiffel tower, Mesnier du Ponsard. Using steam as an energy source, as it did back in the day, it takes you up to the top to admire the downtown landscape. It is also connected via a passage to the Carmo Convent and museum, another spot worth visiting in the area! PRAÇA DO COMÉRCIO Impossible to miss, the iconic Praça do Comércio, also called Terreiro do Paço, is the original spot where the royal palace was located until the massive destruction caused by the 1755 earthquake. It was recently considered as one of the most beautiful and perfectly dimensioned squares of Europe. You can also climb up the Archway of Augusta to get a spectacular view of the square, the river and the surrounding area. AVENIDA DA LIBERDADE The city’s version of Paris’ Champs Elysées. It’s a tree-lined boulevard noted for its high-end brand outlets, tailoring shops and café´s. ROSSIO Rossio has been a traditional meeting point for the people of Lisbon dating back to the 18th century. Some of the cafés and shops in the square, such as the Café Nicola, were frequented by famous poets such as Manuel Maria Barbosa du Bocage. Other traditional shops include the Pastelaria Suíça and the Ginjinha, where the traditional Portuguese liqueur (Ginjinha) can be tasted. ALFAMA Recognised as oldest district in Lisbon, Alfama is a traditional, tranquil and artisan neighborhood. It hosts a labyrinth of streets that are best explored without a guide or a map as an exciting museum,viewpoint, restaurant or funky store is just around the corner. Here also lies the heart of fado, the melancholic Portuguese genre of music whose origins can be traced back to the 1820´s in Lisbon. The famous Tram 28 also passes through this district, which connects the districts of Graça with Baixa through Alfama, thus it is perfect for both those that enjoy hill climbing, and those that do not. SÃO JORGE CASTLE Easily one of the most memorable monuments in Lisbon, the Moorish São Jorge Castle is one of the jewels of Lisbon, one that has overlooked the historic city of Lisbon and the Tagus River for over a millennium.