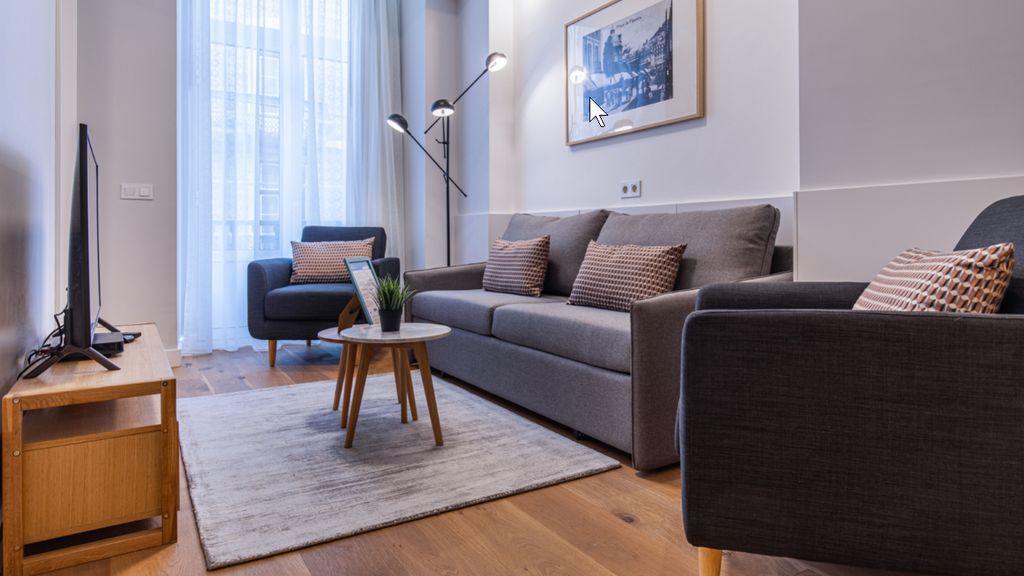 This new two-bedroom apartment is situated in Baixa-Chiado, close to the train and metro stations of Rossio, a gorgeous neighborhood filled with restaurants, cafés, and many Lisbon top attractions. Newly renovated with high-end finishings and modern décor. It has a fully equipped kitchen with ample amenities, including high-quality mattresses and a large bathroom with a whirlpool bathtub. We are certain your stay at our apartment will be both comfortable and memorable! WHAT'S NEARBY: - Rossio Metro Station: 1 min - Elevador de Santa Justa: 2 min - Starbucks: 2 min - Convento do Carmo: 7 min - Praça do Comércio: 7 min

Situated in a typical Portuguese building, this 2 bedroom apartment is truly cozy, sunny, well-situated and perfect for couples and families! Close to most of the major touristic spots in Lisbon, it's ideally located for those hoping to explore our historic city on foot! We look forward to hosting you. KEY FEATURES: - Two bedrooms; one with a queen-sized bed, and a second bedroom with 2 single beds and good mattresses. All bedrooms come with comfortable sets of bed linen - One spacious bathroom with a shower, a toilet, and a sink. Towels and toilet paper are provided for your convenience! - A living space with modern décor, a cozy sofa bed, cable TV and good wifi. You will be able to relax and catch up on your favorite shows after a lovely spent exploring Lisbon! - A fully-equipped kitchen that comes with all the key appliances you could require during your stay. - A dining area that can accommodate 6 people! FINE PRINT: - This apartment is located on the first floor and, unfortunately, an elevator is not available in the building.

The apartment is located in the center of the city, Baixa. Baixa is an elegant district that contains the grid of streets north of the famous Praça do Comércio, between Cais do Sodré and the Alfama district beneath the São Jorge Castle. It then extends northwards towards the Rossio and Figueira squares, and one of the most important avenues in Lisbon, the 1100m long Avenida da Liberdade. Baixa neighbors Chiado, The shopping hub of Lisbon. This vibrant and cosmopolitan area hosts a variety of charming old bookshops, local and major international fashion brand outlets, restaurants, and cafés. In fact, the Café Brasileira, one of the oldest café´s in the city, can be found here. Other local attractions: GARRET STREET The easiest way of walking to get to Baixa-Chiado is through Rua Garret. It hosts a number of remarkable historical shops, such as the Bertrand Bookshop, distinguished by the Guinness World Records as the world’s oldest bookshop founded in 1732 and other recommended spots such as the Armazéns do Chiado, the busy shopping mall of Chiado, and the Santini Ice Cream store located right opposite the mall. ELEVADOR DE SANTA JUSTA The famous elevator was inaugurated in 1902 and built by a Portuguese-French engineer who studied with the architect of the Eiffel tower, Mesnier du Ponsard. Using steam as an energy source, as it did back in the day, it takes you up to the top to admire the downtown landscape. It is also connected via a passage to the Carmo Convent and museum, another spot worth visiting in the area! PRAÇA DO COMÉRCIO Impossible to miss, the iconic Praça do Comércio, also called Terreiro do Paço, is the original spot where the royal palace was located until the massive destruction caused by the 1755 earthquake. It was recently considered as one of the most beautiful and perfectly dimensioned squares of Europe. You can also climb up the Archway of Augusta to get a spectacular view of the square, the river, and the surrounding area. AVENIDA DA LIBERDADE The city’s version of Paris’ Champs Elysées. It’s a tree-lined boulevard noted for its high-end brand outlets, tailoring shops and café´s. ROSSIO Rossio has been a traditional meeting point for the people of Lisbon dating back to the 18th century. Some of the cafés and shops in the square, such as the Café Nicola, were frequented by famous poets such as Manuel Maria Barbosa du Bocage. Other traditional shops include the Pastelaria Suíça and the Ginjinha, where the traditional Portuguese liqueur (Ginjinha) can be tasted. ALFAMA Recognized as oldest district in Lisbon, Alfama is a traditional, tranquil and artisan neighborhood. It hosts a labyrinth of streets that are best explored without a guide or a map as an exciting museum, viewpoint, restaurant or funky store is just around the corner. Here also lies the heart of fado, the melancholic Portuguese genre of music whose origins can be traced back to the 1820´s in Lisbon. The famous Tram 28 also passes through this district, which connects the districts of Graça with Baixa through Alfama, thus it is perfect for both those that enjoy hill-climbing and those that do not. SÃO JORGE CASTLE Easily one of the most memorable monuments in Lisbon, the Moorish São Jorge Castle is one of the jewels of Lisbon, one that has overlooked the historic city of Lisbon and the Tagus River for over a millennium.

1. Please make yourself at home! 2. Please take care of the house as if it were your own, keeping it clean and tidy. 3. Save water & electricity and help us protect the environment. 4. Be kind to your neighbors and please avoid making noise after 22h as this is a residential building (Noise is prohibited from 22h until 8h in the morning as per the law in Portugal). 5. Smoking is prohibited in the house and the building. 6. Please be safe and protect yourself by not leaning over or sitting on the windowsills, balconies or handrails. 7. All windows and doors must be locked when leaving the apartment or during rainfall. Please also keep the building and apartment doors locked when away from the apartment. 8. Events or gatherings of any kind are not allowed. 9. Pets are not allowed (sorry!). *The property owners cannot be held accountable for the consequences of the misuse of gas and electrical equipment, balconies, windows, handrails, stairs and any other hazardous areas.*